University of London: Inspired by Design

An opportunity for 6th formers studying design subjects to gain inspiration from various faces from the design industry, from the recently graduated to well-known designers. Each person delivered an interesting point of view and to understand their opinions about how to go about working within this profession. Not only did the students listen to the lecture, but also got to be involved with an interactive activity by creating a large paper weaved installation. The outcome was a bit of a dissapointment due to the selotape getting stuck in the wrong places across the room, and they tried to get it to light up using a UV lamp on stage - but of course this was not strong enough and the project was more effective with the lights turned on and a sense of achievement and team work when the piece was complete.

And of course what happens when you give 16-18 year olds paper? They start to throw it at each other and make paper airplanes, which was also equally entertaining.

As for the speakers, they consisted of:

'British Industrial designer Sebastian Bergne is renown for making everyday objects special with his essential and human approach to design.'

His designs are based on making what is already designed and taking it out of its usual habitat and function, and evolving it into a new and interesting piece of work. One design he mentioned which was particularly interesting is a ruler which had been designed to flick elastic bands, or a bottle opener where the handles are created by using old wine corks which you are able to change, and also have the memory of the wine and occasion.

Another project which was very simplistic and modern was the geometric nativity scene he had produced - a playful idea contrasting contemporary design with a traditional location. The concept behind the idea is intruging, and shows design does not have to be complicated in order for it to work.

It is a clever idea to use the knowledge of how the brain understands colour and form and associating this with particular characters, and due to the arrangement in the image you can immediately tell what the objects are portraying. A key point that Bernge mentioned was that you do not have to design a product just to make it functional - as long as it is interesting and unusual and can make people think. Can you make an object do something else than its intentional function?

'Emily Campbell grew up in a highly academic environment in Cambridge UK. She would often watch and study with fascination her Physicist Father, scribbling drawings and mathematical sums as she sat on the floor. This led her to thinking about her perception of the world, and what her own language of communication was.

Emily has always questioned and assessed the world about her, and through her art she challenges convention. What is important? What is intelligence? What is beautiful? What is reassuring? What is evocative and uplifting? What is it about an environment which makes us feel safe, positive, or insecure and nervous and why?

‘Looking beyond the surface’ is a concept Emily addresses frequently. The ground intact and undisturbed represents secure and impenetrable relationships. Broken relationships are symbolised through the cracked up flooring surface, yet glimpses of these new worlds with their optimism and hope exist between these shattered pieces of flooring'.

Campbell's talk gave a break down of sections in to good design, and to get the students to think about questions and little tasks set in her presentation.

Structure - More than one type of material, joining of parts that are old and new? Look at the transitions between the two. Take care of the joins within your piece of work - how can you make it more interesting and will it be long lasting?

Pattern - Think of multiples and repitition. It is a rule. Look at the variations of the problem you need to solve. Create variable and think about things you will keep the same or change, and choices with minimal parts? If you do not have a rule, there will not be a pattern.

Meaning - As obvious as it sounds. A good example of meaning is Alessi - a figurative design created for the high end market. Think about why your design has been made and how it will be memorable - could it mean something else unintentionally and would that be a bad thing? A recomended book is 'Fancy Goods in Design as Art', 1966 by Bruno Munari.

Performance - How does your production behave under different conditions? Think about the different factors such as weather, interior or exterior locations, materials that could enhance or supress the performance of your design. You can concerntrate too hard on this area of design, so be careful.

Human Interaction - Who is your market? How old are they? Where do they live and what job do they have? Think about the everyday frustrations we have with existing products and could you be the one to change this and make things easier? Could you even change the behaviour of people with something you have created?

Fabrication - Be resourceful and learn by making. One example of this is Kingston University's video remake of 'I Fink U Freeky' where the pupils had a budget of approximately £50 to create a music video and make the props etc.

Fresh out of university and lots of stories to tell about how drunk they got, these three boys collaborated at university to create the Paper Pulp Helmet - an interesting idea of using recycled newspapers to try and create something that will save your life. Again, the concept is interesting but is it going to work?

Ed Thomas unfortunately couldn't be at the talk due to problems with his business, but the other two gave an insightful talk of their stage of the design process. The helmet is a novel use of recycled material and wanted to utilise London's waste to make something useful. 9 and a half tons of newspaper is left on the tubes every day, and combining this with the ever more growing Boris Bike Scheme, they eventually created the fundementals of a new design which attracted the likes of Metro and Dezeen, and having professional photographs of their product witihin a location allowed it to become more noticable.

If they can pull of this idea and create a sellable product which can enhance the safety of a person then I cannot wait to see the final outcome. However in the mean time, the aesthetics of the product is poor and I certainly would not wear that on my head.

Definitely the most inspirational talker, and one which the students enjoyed the most. The background to his success was most insightful, with the overall point being that you do not have to be rich or come from a design based location to be someone within the design industry.

At 18, he and his partner who was very good at making clothing, decided to start selling bits and pieces in Camden - such as converting old Doc Martins by soldering them. His small business on a stall soon grew in to his controversial company 'Red or Dead', and later sold this to then start up Hemingway Designs.

His advice to young designers was extremely thought-provoking - in order to be a successful designer you need to make outside of school. Wear your own designed clothes you have made if you want to be a fashion designer, or design websites for friends and family if you want to be a website designer. Success isn't money, it's the time spent and your experiences. You gain so much from falling, and it makes you very employable due to how much you have learnt. You do not have to be good at drawing, just good at wanting to find soloutions. Question why you hate it and why you would like to make it better.

A very dominant message came across throughout the talks which was to use old materials and look into recycling, sustainability and development of existing products - I believe this is to try and educate the students and get them to use this in projects, so that in the future we will see a lot more alternative ready mades, rather than using up brand new resources and materials. 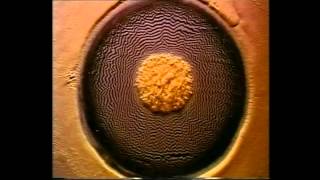 With the Help of Hans Jenny...